Disclosure: I received this product for the purpose of a review. All opinions are a 100% mine!

Power Rangers Turbo is available on dvd  to the delight of children nationwide. For more than 20 years parents and kids have agreed that the Power Rangers are pretty cool. They know what it takes to help others, work as a team and to be responsible.

My kids had the chance to watch Power Rangers Turbo Volume 1 not long ago. They were hooked! This 23 episode volume was a lot of fun for them, my son loved the action! My daughters loved the costumes and I loved that they could all agree on what show to watch {Hooray for the Power Rangers!}

Let me tell you a little more about this dvd set: 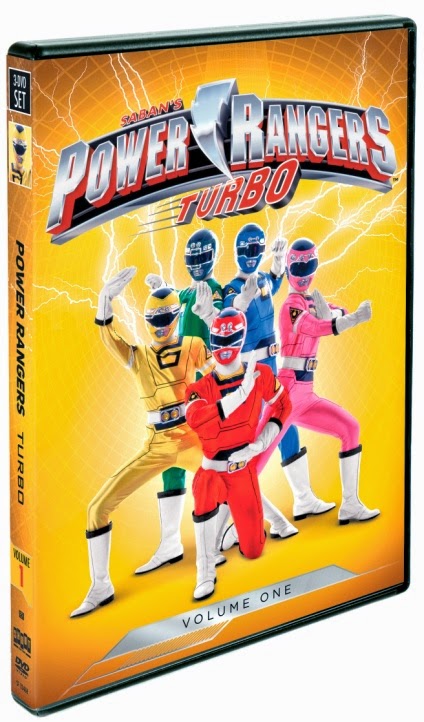 Continuing from the exciting events of Turbo: A Power Rangers Movie, the five Turbo Rangers use their new powers, weapons and high-tech supercharged vehicles to battle evil at faster speeds than ever before! The beautiful yet vicious space pirate Divatox follows the Power Rangers to Angel Grove to get revenge for ruining her planned wedding to the volcanic island deity Maligore. From her mobile Subcraft armed to the gills with torpedoes and explosives and crewed by a motley bunch of monsters, she relentlessly pursues our heroes. But the Rangers are not alone in their fight, as they are aided by Dimitria, a wise sage and friend of Zordon; Alpha 6, an advanced robotic sidekick with a streetwise demeanor, the Blue Senturion, a robotic intergalactic traffic cop from the future; and the elusive Phantom Rangers, a one-man army whose very identity is a mystery. An all-new team of Rangers is armed and ready to carry on the Power Rangers legacy!


Following its debut in 1993, Saban’s iconic live-action pop culture series, Power Rangers quickly became the most watched children’s television program in North America. Emphasizing the importance of teamwork, responsibility and helping others by following the adventures of a group of ordinary young people who “morphed” into superheroes, this long-running series has been seen in more than 60 countries, translated into numerous languages, and remains a mainstay in children’s programming blocks. For 20 years, the highly entertaining saga and fan favorite characters from Power Rangers have captivated children and adults alike and are beloved by legions of fans worldwide.

The Power Rangers appeals to children across the world. They get good lessons about team work and helping others with a measure of action and excitement. My kids loved this Volume of the Power Rangers and I have a feeling your kids will too.