Disclosure:  I received a Free product for review. My opinions are 100% mine.
If you have daughters, chances are you know all about the Littlest Pet Shop. My girls love Blythe and the pets, so you can imagine how happy they were to get to check out the latest dvd release, Littlest Pet Shop: Strike a Pose.
This was a really fun dvd for the girls, they loved all 5 episodes and were inspired to have hours of play with their littlest pet shop toys. I love that the show inspires my girls imagination and teaches them to be kind to animals. I often hear that Sadie, our dog is their best friend, just like Blythe and Zoe. 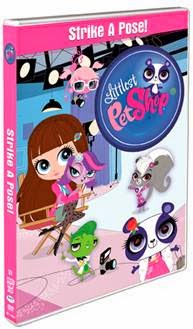 Let me tell you a little more about this dvd, Hasbro and Shout Factory:
Blythe and her best friends — Zoe the spaniel, Pepper the skunk, Sunil the mongoose, Vinnie the gecko, Russell the hedgehog, Penny the panda and Minka the monkey — are back for five more exciting escapades in the Littlest Pet Shop! Shout! Factory, in collaboration with Hasbro Studios, will release Littlest Pet Shop: Strike A Pose! on DVD June 3rd, 2014. Featuring five wild episodes, this collection features  Blythe and her friends filming a TV commercial, Sunil becomes an internet phenomenon, Vinnie befriends some dancing lizards and the Pet Shop welcomes a juvenile alligator into their midst! All of these adventures and more unfold in these five wild episodes of The Littlest Pet Shop!
When Blythe Baxter moved into the city with her father, she never expected to move into the apartment above the Littlest Pet Shop. But an even bigger surprise awaited her. Blythe can talk to the pets…and they can talk back! Littlest Pet Shop: Strike A Pose! delivers captivating entertainment the whole family can enjoy and contains a brand new bonus sing-along. Featuring all-new original music by Daytime Emmy® Award nominee Daniel Ingram and the vocal talent of Ashleigh Ball, Tabitha St. Germain, Nicole Oliver and Peter New, Littlest Pet Shop currently airs on The Hub TV Network in the US.  Fans can pre-order their copies of the collection now by visiting ShoutFactory.com
Episodes Include:
So You Skink You Can Dance?
Commercial Success
What, Meme Worry?
The Big Feathered Parade
Alligators and Handbags
Bonus Features:
Sing-Along
About Hasbro Studios
Hasbro Studios is the Los Angeles-based entertainment division of Hasbro, Inc. (NASDAQ: HAS). The studio is responsible for entertainment brand-driven storytelling for the company across television, film, commercial productions and short-form. It develops, produces and distributes TV shows based on Hasbro’s world class brands, including TRANSFORMERS, MY LITTLE PONY, LITTLEST PET SHOP and FAMILY GAME NIGHT. Many of these shows air on the Hub Network, a U.S. television network for kids and their families, that is a joint venture between Hasbro and Discovery Communications (NASDAQ: DISCA, DISCB, DISCK). Hasbro Studios shows can also be seen on networks in more than 180 territories globally.  Since its formation in 2009, the studio has received seven Daytime Emmy wins and 16 nominations.  On the film side, the studio is developing and producing a number of features based on Hasbro’s brands, including TRANSFORMERS: AGE OF EXTINCTION (Paramount), G.I. JOE 3 (Paramount) and CANDY LAND (Sony).  The studio team also oversees the production of commercials that feature Hasbro’s brands as well production of short-form content that can be seen on all of the major digital and social media platforms globally.
About Shout! Factory
Shout! Factory, LLC is a diversified multi-platform media company devoted to producing, uncovering, preserving and revitalizing the very best of pop culture. Founders Richard Foos, Bob Emmer and Garson Foos have spent their entire careers sharing their music, television and film favorites with discerning consumers the world over. Shout! Factory’s DVD and Blu-Ray™ offerings serve up feature films, classic and contemporary TV series, animation, live music and comedy specials in lavish packages crammed with extras.  Shout’s audio division boasts GRAMMY®-nominated box sets, Broadway cast albums, new releases from storied artists, lovingly assembled album reissues and indispensable “best of” compilations.  In addition, Shout! Factory maintains a vast digital distribution network which delivers video and audio content to all the leading digital service providers in North America.  Shout! Factory also owns and operates Timeless Media Group, Biograph Records, Majordomo Records, HighTone Records and Video Time Machine. These riches are the result of a creative acquisition mandate that has established the company as a hotbed of cultural preservation and commercial reinvention.  Shout! Factory is based in Santa Monica, California. For more on Shout! Factory, visit shoutfactory.com
If you have an animal loving little girl in your life, this dvd will make her very happy, you can take my word for that. Look for The Littlest Pet Shop: Strike a Pose in a store near you and get ready for 5 fun filled episodes featuring the characters your girls love.